⇑ back to "Features" 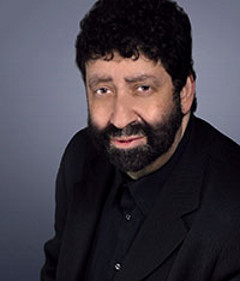 In January 2012, Jonathan Cahn’s New York Times bestseller, The Harbinger, released to the public and quickly garnered widespread media attention and popular appeal. The book, a narrative revealing ancient mysteries 2,500 years old pointing to 21st century America’s future, sounded a wakeup call and promptly triggered a gamut of questions from readers who realized the spiritual significance of the story. Now, a year later Cahn is releasing The Harbinger Companion: With Study Guide. Filled with photos, drawings, photographs, charts and a section answering the most often asked questions surrounding The Harbinger, the book is non-fiction. Cahn explores each mystery he revealed in The Harbinger, piece by piece, with background information. The Companion also features a 13-week study guide that individuals, small groups and churches can use to go deeper into The Harbinger.

Here in this interview, Cahn talks the nation’s response to his 2012 book, this new work and why it’s vital that church leaders preach prophetically on the end times.

Jonathan, did the overwhelming response to The Harbinger surprise you at all? Why do you think it caused such a stir throughout the nation?

From the way The Harbinger came to me and the way it became a book, I had no doubt it was from the Lord. So I had an assurance that it would go forth to the nation. What surprised me was how fast it all happened. The week of its release, it became the No. 1 new book on Amazon and made The New York Times best-sellers list. That definitely surprised me. I still don’t understand the dynamics of how it happened.

I believe the reason The Harbinger is causing a stir through America is due to that same reason; it’s a prophetic word; an alarm, a wake-up call. So by its very nature, if it is to make a difference, it must be different. A wake-up call, an alarm, has to cause a stir. There has to be some controversy, or it’s not doing its job. In fact, if you look at the end of the book, you’ll see it’s foretold that it would have to be that way.

What does that response tell church leaders about where people are today, what they’re thinking, what they’re wrestling with, etc.?

It tells us there’s a deep sense among believers and not just believers that America is in trouble, heading down the wrong path. I believe that most believers have that sense, and a sense of danger concerning judgment. What The Harbinger did was to reveal that it’s not just a sense. It’s real, it’s happening. America is following a precise and exact progression of biblical judgment with exact and precise signs and manifestations (harbingers) appearing in the land.

Ever since The Harbinger released, people have wanted to know more, to go deeper into the mysteries. Before we knew it, the message was being preached in pulpits, taught in Church classes, shared in Bible studies. Churches devoted weeks of preaching, classes and studies on it.  It was already happening long before The Harbinger Companion began. People were writing to us from all over the country asking for more and wanting to start up Bible studies. I was also deluged with people asking me about the story behind the story: Who was the prophet? Was I Nouriel? How did the revelations come? Beyond that, people were coming from all over the country to the Jerusalem Center/Beth Israel, the congregation I lead, and then going to New York City to search for the actual harbingers and the places in the book. So there was a very intense demand for more. The Harbinger Companion answers all of those questions and provides a study guide for individual readers, Bible studies and churches to go deeper into the mysteries.

Tell us a little about how the content of the Companion came together. In what ways is this new work Spirit-led? How did He lead you as you worked on it?

The original idea was to do a study guide that could be used by individuals and churches. And The Harbinger Companiondefinitely has that. But it quickly became much more. I don’t know if I woke up with the idea, but I know the idea of it becoming more came to me very suddenly. I shared the idea with the publisher [Creation House, the book publishing arm of Charisma Media, which publishes Ministry Today], and they believed it was the Lord. From there, it just snowballed.

The book begins with a 13-week course and exploration into the mysteries, the issues, the background, the spiritual principles and taking the truths into action and practical application. It was one of the most frequently asked questions: “Now that we’ve read The Harbinger, what do we do?” The Companion answers that question, giving practical application that any individual can apply, as well as a larger call to action, to impact our nation and world.

I also believed that that the Companion should be filled with images. For many readers, for the first time, they will see images of the nine harbingers and the mysteries written about in The Harbinger. For example, one of the photographs we included is one of the Nine Seals mentioned in the book.

There’s a section on end-time prophecy, detailing what has been fulfilled and what is yet to come. There’s a feature on where America fits in or doesn’t fit into the prophecies of the last days. There’s a chapter that gives the background into every major biblical character mentioned in the book, and one which outlines the prophecies of Messiah—and of course a piece on salvation.

And one of the most dramatic is the story of how The Harbinger became a book in the first place. It involves what happened to me at Charlotte Airport, a scene every bit as dramatic and ‘supernatural’ as any scene in the book.  In fact, as in the book, it involved the appearance of a mysterious stranger.  In fact, it was as if God reproduced one of the scenes in The Harbinger to cause the book to be published. Another story involves a man who showed up at the congregation, as a true, flesh and blood, real-life Nouriel.

What are some of your personal favorite features in the Companion?

It’s hard to say, but one of the most unique is the “Guided Tour of The Harbingers.”  This section has maps, photographs, and background information that guide readers as they find and discover the actual harbingers for themselves.

Why did you want to include a guide? Do you have any tips or ideas for how churches can use it as we begin 2013?

The study guide lends itself especially to congregational use. It can be done as an entire church series, with preaching from the pulpit on Sunday and exploration by congregants throughout the week. It can even be used evangelistically as The Harbinger is of interest to anyone who lives in America, believer or unbeliever. It can also be done as series in classes and Bible studies. The questions could be used as key points in a group discussion. The study guide has instructions for how to use it in any of these formats. In addition, DVD teachings accompanying many of the chapters are also available. At the end of every teaching, we’ve included a section on applying the revelations to life. So everyone leaves the preaching or teaching with a mission to go forward within the coming week. The last session is geared for prayer and revival, individual revival and corporate or church revival.

Why is it vital that church leaders teach on the end times?

If one is living in the end times, it is vital to speak about it. If one is living in a nation under judgment, then as God’s ministers we must alert those around us to that fact and do everything we can to warn those around us and to prepare our people. Beyond this, such messages lead to personal and congregational revival. It is a message to America, but it is also a message to the believer. Judgment begins with the house of God—and so does revival. One of the amazing things that’s happened since The Harbinger came out is that what’s spoken in the book is coming true. The harbingers are continuing. The mysteries are continuing to manifest. 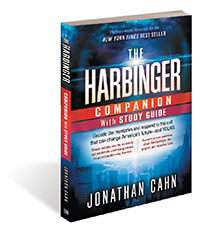 The Harbinger Companion With Study Guide (for church classes and pastoral study) recently early this year. To get the full teachings behind The Harbinger, go to TheHarbingerWebsite.com for the DVD set The Harbinger: The Full Revelation. You can also read the full, uncut version of this interview with Jonathan Cahn at ministrytodaymag.com.