⇑ back to "Features"

Has the Spirit of the World Entered Your Congregation? 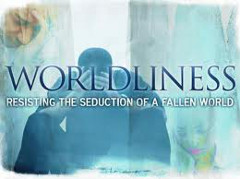 The head of a large missionary organization told me that they are being sued by two of their members. These people had earlier dedicated their lives to missions.

Now they have various ailments. One man has ulcers. A woman, who lived in the tropics, has skin cancer. A "Christian" lawyer, hearing of their problems, advised them to sue the missionary organization. Their afflictions, he says, are "job related."

The mission director shook his head. "They were willing to give their lives—but I guess that didn't include stomach and skin." The missionaries and their lawyer have been infected with what Paul called "the spirit of the world" (1 Cor. 2:12).

Despite the classic Pentecostal definition, worldliness (the Greek word is kosmos) is far more than cosmetics. It is also more than R-rated movies or X-rated prostitutes. Worldliness is focusing on the things of time rather than things eternal.

The sin of today's Pentecostal leaders is not sexual impropriety—acts hardly worth mentioning. The real problem is a life stance which focuses on the visible earthly kingdom rather than the invisible kingdom of God. It's evidenced by incomprehensible wealth, overwhelming debt, ungodly fund raising and lavish homes.

It's sad that the muted lips of the Assemblies of God were only able to blow the whistle after their former heroes were caught. Sad, because worldliness is far more than smoking and sex. Sad, because many Assemblies of God leaders were emulating the same materialism exhibited by those now trapped in their own web, paralyzing the denomination's power to police except when it came to outward acts.

Americans—most of whom are middle class and caught in their own worldliness—see us taking offerings from the poor in order to feather our beds. They call us Cadillac Christians and wonder why we don't give away more than we keep. They seem to know God has called us to walk by a different standard and are angry when we don't.

Too many of our leaders resemble the worldly sons of Eli—Hophni and Phinehas—who "treated the Lord's offering with contempt." These forerunners of today's prosperity preachers enjoyed temple living, eating the fat which should have been used as a burnt sacrifice. Because of them God put the death curse of Ichabod on the entire nation.

The "spirit of the world" has infected all of us. We see it in the struggling black churches where the poor, unable to rise from their poverty, elevate their pastors to the role of king. We see it in the once-poor Pentecostal churches which, having ridden the charismatic wave across the tracks, now rival the downtown banks and hotels in plush materialism.

We see it in the liturgical churches which have gold-plated the cross as a status symbol. Their clergymen, who are sometimes imitated by "uptown" Pentecostals, dress themselves in royal robes, title themselves as "reverends" and drive royal chariots for one reason: status.

Tell me, can you picture Jesus dressed in scarlet and wearing a dangling cross? And what about the rest of us? We spend millions on self while giving pennies to missions. Our American brand of Christianity has become a wealthy counterculture which no longer cares about the image it projects. For every soul won to Christ by our flashy buildings and multimillion-dollar television ministries, there are millions who drive by, angry at the injustice these money-suckers represent.

We brag about being New Testament Christians while living the lifestyle of Nero. We have become like Demas, who deserted Paul "because he loved the world."

I recall the opening statement made by Francis MacNutt at the Holy Spirit Conference in Jerusalem in 1976: "If Jesus were on earth He wouldn't be here today. He couldn't afford the registration."

We have forgotten who Jesus was—and how He lived. As a kid I thought the ushers took the offering up into the belfry and burned it as a sacrifice. That was before I knew about preachers who used it to buy gold faucets.

"The greatest task with which the church is confronted," Dietrich Bonhoeffer said from his Nazi prison, "is to teach people how to live in this world."

And I add, without letting the world live in us. So we have two problems: What to do with the bodies of our fallen comrades and how to keep from falling ourselves? Commenting on this, Roy Hicks Jr. of Eugene, Ore., said he was reminded of David's attitude toward the death of Saul.

He lamented his fall and sent his mighty men to rescue the bodies of Saul and Jonathan. "While we must not compromise the standards of righteousness for leaders," Hicks says, "we also must not allow the 'bodies' of those who have fallen to remain exposed for the devouring analysis of a fallen world."

The confused folks of this culture—who judge us by the behavior of a few—are looking for a breed of people who are different, who are not in bondage to the world as they are. The only way we will ever restore our lost credibility is to pick up our wounded, renounce what we have become and recommit to be like Jesus.

From 1979 until his death, Jamie Buckingham (1932-1992) wrote the "Last Word" column for Charisma magazine, which originally published this article. He was the editor of Ministry Today magazine at his untimely death in February 1992—more than 20 years ago.